Charleston Travel: A Visit to the City Market and King Street

Continuing my Charleston travel experiences on December 1, 2012, I followed up my horse-drawn carriage tour with a visit to the Charleston City Market, one of the city’s most well-known and popular sights.

Given Charleston’s long history, the first market was established as early as 1692, followed up by the first brick market structures in the late 1730s. The Charleston City Market stretches for four long city blocks and consists of the impressive Market Hall, built in 1841 in a Greek Revival style, and several low-lying sheds that date from the early 1800s. The entire complex has been designated a National Historic Landmark and has survived many calamities, from fire to hurricanes, tornadoes, earthquakes and bombardment during the Civil War.

The Charleston City Market is a great place to stroll through and offers a wide assortment of merchandise. The purchasing opportunities include clothing, souvenirs, artwork, handicrafts, jewellery and various oddities such as desiccated alligator heads. 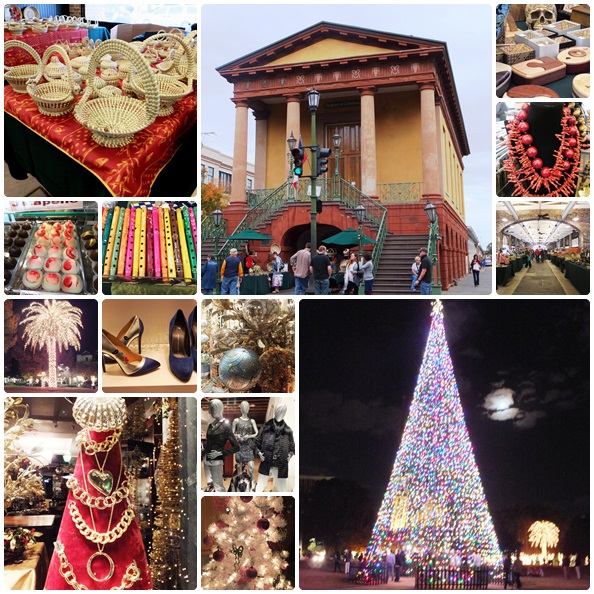 Charleston – A Visit to the City Market & King Street

Among the local specialties at the market are the sweetgrass baskets, handcrafted and sold mostly by local black women who are descendents of slaves that used to work the plantations of South Carolina. In this area as well as in coastal Georgia, in the so-called “Lowcountry”, the cultural and linguistic heritage of former slaves has been preserved as the Gullah culture which is influenced by the traditions of Sierra Leone in Africa. The Creole language spoken by the Gullah people preserves many African characteristics and is also related to the language spoken in Jamaica, Barbados and the Bahamas.

In the evening we embarked on a walk on King Street, Charleston’s most popular shopping street which stretches for several kilometers. King Street is full of upscale clothing shops, book and jewellery stores as well as a wide assortment of bars, restaurants and nightclubs. What I really enjoyed was the historic architecture all along the street that continued uninterrupted for long distances without any modern buildings that disrupt the overall impression.

On this Saturday night the area was extremely busy with hundreds of dressed-up university students that were roaming the street in search of entertainment. This is not surprising since Charleston is an important university town and the College of Charleston is just steps away from King Street.

At the intersection of King Street and Calhoun Street we explored Marion Square, a large public square that was a former parade ground. Adjacent to the north of the square is the South Carolina State Arsenal, also known as the Old Citadel, a huge military building that was built in the early 1830s as a response to a 1822 slave revolt. The building became the South Carolina Military Academy in 1822 and the first shots of the American Civil War were fired by Citadel cadets in 1861. The military school was relocated to a location on the west side of Charleston in 1922. In 1994 the building was turned into a hotel and is now occupied by the Embassy Suites Charleston.

December 1 was a special day because that was the day of the Christmas tree lighting. The lights on the 60 metre high tree-shaped cone had been turned on at 4:30 and a whole assortment of illuminated trees graced the lawns of Marion Park.

We were very impressed by the lively atmosphere on King Street and after a day of pleasant sightseeing, we had come away with lots of fond Charleston travel memories.