On December 28, 2012 I embarked on a local Toronto travel adventure: Casa Loma – Toronto’s castle. For this year’s Christmas, the castle was decorated as “Mozart’s Magical Castle” and for the entire month of December 2012, the castle was the location of live performances, workshops, wandering characters and strolling carollers. All sorts of special events were on offer: Santa’s Workshop, Story Time, Breakfast with Santa, Build a Dragon and more. Obviously, this historic castle provides the perfect backdrop for all sorts of historically themed events.

Built by super-wealthy financier Sir Henry Pellatt, this extravagant landmark took more than three years to build and was finally finished in 1914. E.J. Lennox, a renowned Toronto-based architect, who had also built Toronto’s Old City Hall and the King Edward Hotel, spent 3.5 million dollars (in 1911 currency) on the construction budget for this lavish structure and engaged 300 workers.

With its 98 rooms, Casa Loma was the largest private residence in Canada. The oven in the kitchen was large enough to hold an ox, and the building was equipped with the most modern conveniences of the time – a central vacuum system, a modern telephone exchange and state-of-the-art bathrooms. It even has two secret passageways.

Following the recession that set in after the end of the first World War and a huge increase in property taxes, Sir Henry Pellatt  was forced to abandon the property in 1923 and it later became a luxury hotel and even a popular nightspot during the 1920s. The City of Toronto seized the Casa Loma in 1933 due to back taxes and four years later leased it to the Kiwanis Club which has been operating Toronto’s second most popular landmark ever since. 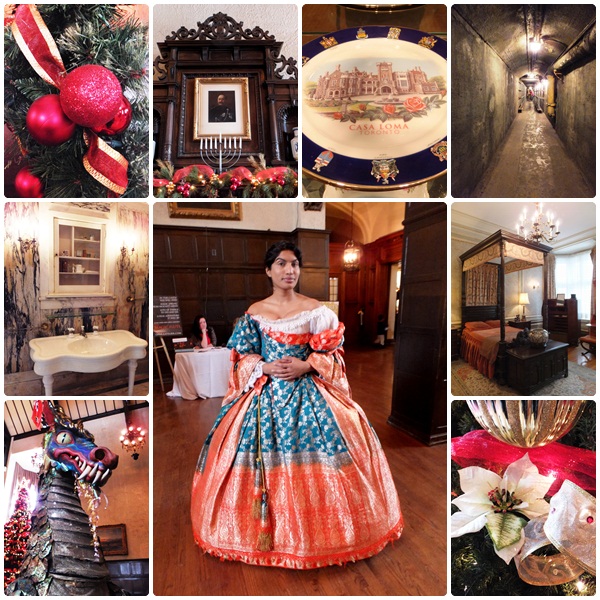 Today, a visit to Toronto’s castle will start on the main floor where you can see the Great Hall, the Library, Dining Room, the gorgeous Conservatory, the Oak room, Billiard Room, Sir Pellatt’s Study and a Serving Room. The Second Floor holds several interesting rooms: Sir Pellatt’s Suite and Lady Pellatt’s Suite (it was tradition 100 years ago for wealthy couples to have separate bedrooms), both equipped with ultra-modern bathrooms of the time.

A Guest Room, the Round Room and the Windsor Room can also be visited. The view from the opulent staircase down to the Great Hall is impressive. The third floor was never completely finished and holds a World War I and a World War II Room, the Queen’s Own Rifles Museum, the Formation Room, Servant’s Room, austin Room and the Pellat Board Room. Higher up one can even head into the rafters and climb up to one of the castle’s towers.

The lower level of Casa Loma holds Sir Henry’s Café and the Gift Shop which offers lots of attractive gifts as well as a photographer who was shooting portraits. Punctually at noon, I joined a large group of visitors in the Library to listen to a dramatic performance from Mozart’s Magical Flute which was followed by a drama workshop for the children. A dragon was enchanting the young ones in the Great Hall and photo portraits came with period costumes to reflect the historic setting.

Among the many Toronto travel destinations, Casa Loma stands out due to its eclectic architecture and interesting history. And there are always special events and seasonal programs going on, so there is always something new to see at Toronto’s castle.