An Evening in Old Town Vienna with a Visit to St. Stephen’s Cathedral, the Graben and Hotel Sacher

It was getting late as we arrived back in Vienna in our speed boat after our excursion to Bratislava. We took the subway into the First District again and walked through some of the narrow streets in the old part of town. We passed by the famous restaurant Figlmüller, “Home of the Schnitzel for more than 100 Years” which is located on the Wollzeile street, behind St. Stephen’s Cathedral. This restaurant prides itself on the fact that the average size of its crispy schnitzels is supposed to be about 30 cm (almost 12 inches) in diameter. On an even narrower street we passed by the “Griechenbeisl” (the Greek Inn), one of Vienna’s oldest restaurants that dates back to 1447. This inn features a figure of the “liebe Augustin” (dear Augustine), a ballad singer who, according to legend, wrote the mocking song “Lieber Augustin” in 1679 during a plague epidemic. This lucky guy supposedly had survived the deadly disease despite having spent a night drunk inside a mass grave for plague victims, he must have had one heck of an immune system. Around the corner from the Griechenbeisl is the Holy Trinity Greek Orthodox Church, a gorgeous Byzantine Revival building that was consecrated in 1858. 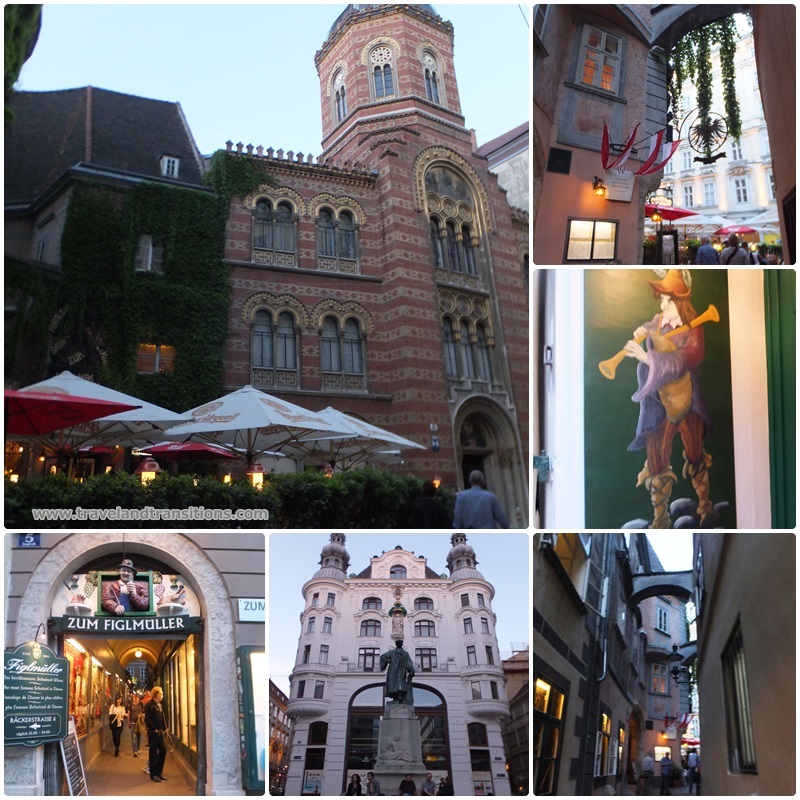 Strolling through the old part of Vienna

On a beautiful warm evening we continued our stroll in Vienna through the narrow alleyways close to St. Stephen’s Cathedral. Many of the historic houses have passageways where you can walk from street to street through a building. Retailers use these walkways as display space, and souvenirs related to Mozart are showcased in many windows. We finally arrived at Vienna’s Gothic cathedral. Many parts of the limestone façade of the medieval cathedral of St. Stephen, which was consecrated in 1147 AD, have been stained by soot and pollution over the years and have to be cleaned periodically. The preservation and repair of Vienna’s most important landmark is an ongoing project and involves some cutting edge techniques, such as laser cleaning of some of the sculptures and stone carvings. 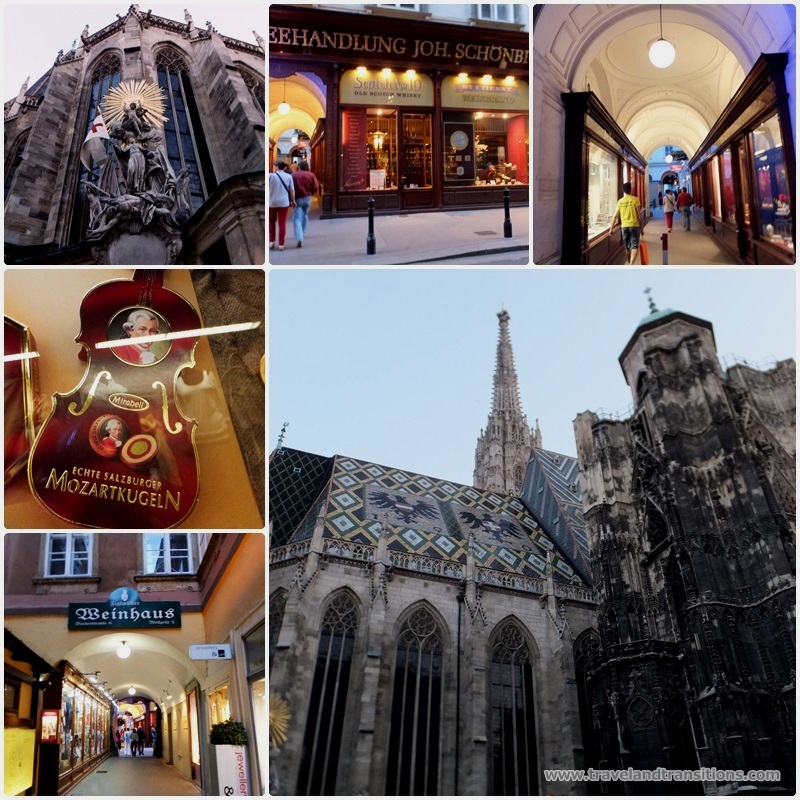 The Stephansdom (St. Stephen’s Cathedral) is constantly under renovation

From St. Stephen’s Square we strolled on the Graben, one of Vienna’s most famous streets. Part of the pedestrian zone in Vienna’s First District, this wide street features many patio restaurants and upscale retailers. It is definitely a place to see and be seen. In the Dorotheergasse, a small side street, we walked past the Jewish Museum Vienna, which, together with a second location on the Judenplatz, features an active program of education, exhibitions and outreach. The first Jewish Museum in Vienna opened in 1896 but was closed by the Nazis in 1938. A small Jewish museum was opened in 1964 while the current facility was inaugurated in 2011. Today the Jewish Museum attracts a record number of visitors with its regular exhibitions, films and evening events. Across the street is the renowned Café Hawelka, one of Vienna’s iconic traditional cafés. Opened in 1939, this coffeehouse became a popular meeting point for writers and artists during the post-war years. Café Hawelka’s most famous sweet treat are “Buchteln”, sinful jam-filled rolls made of yeast dough that are covered with powdered sugar, a dessert that is popular all throughout Austria, Slovenia, Slovakia and Hungary. Anyone with a sweet tooth is definitely going to enjoy their stay in Vienna. 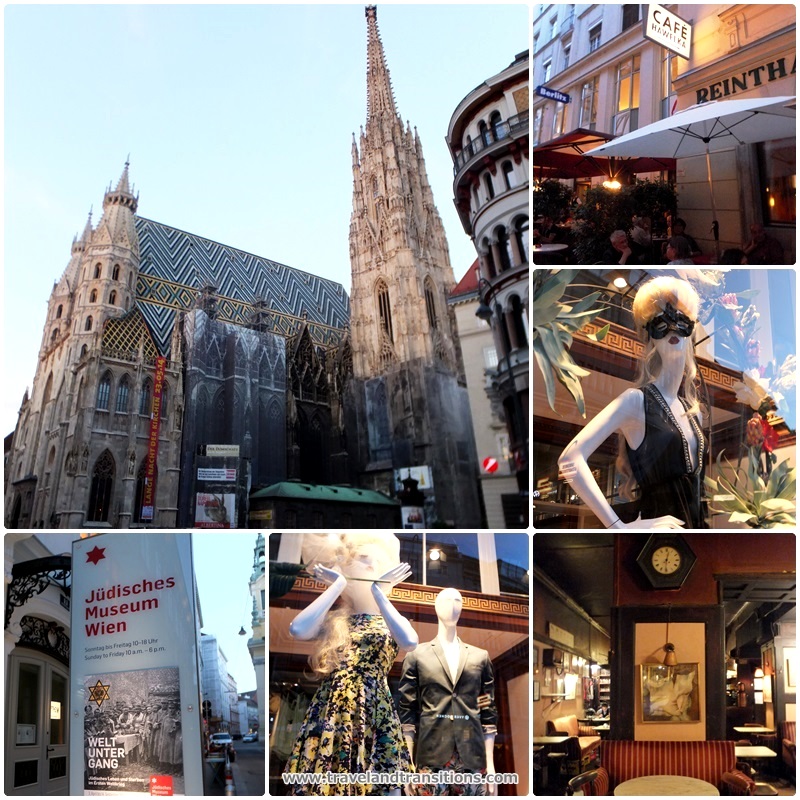 The Graben is one of the oldest streets in Vienna

At the end of our long sightseeing day in Bratislava and Vienna, we completed our stroll through the Austrian capital with a walk past the imperial Hofburg Palace. Just minutes away, we passed by the beautifully illuminated façade of the world-famous Hotel Sacher – the hotel that carries the same name as the iconic Sacher Torte. This chocolate cake with its characteristic layer of apricot jam and dark chocolate icing was first created in 1832 when Prince Metternich instructed his head chef to come up with a special dessert for important guests. But the chef fell ill, so the 16 year old apprentice Franz Sacher conceived this typically Austrian dessert. In 1876, his son Eduard founded the Hotel Sacher, a 5-star property that is located directly across from the Vienna State Opera. Vienna is very proud of its culinary traditions. 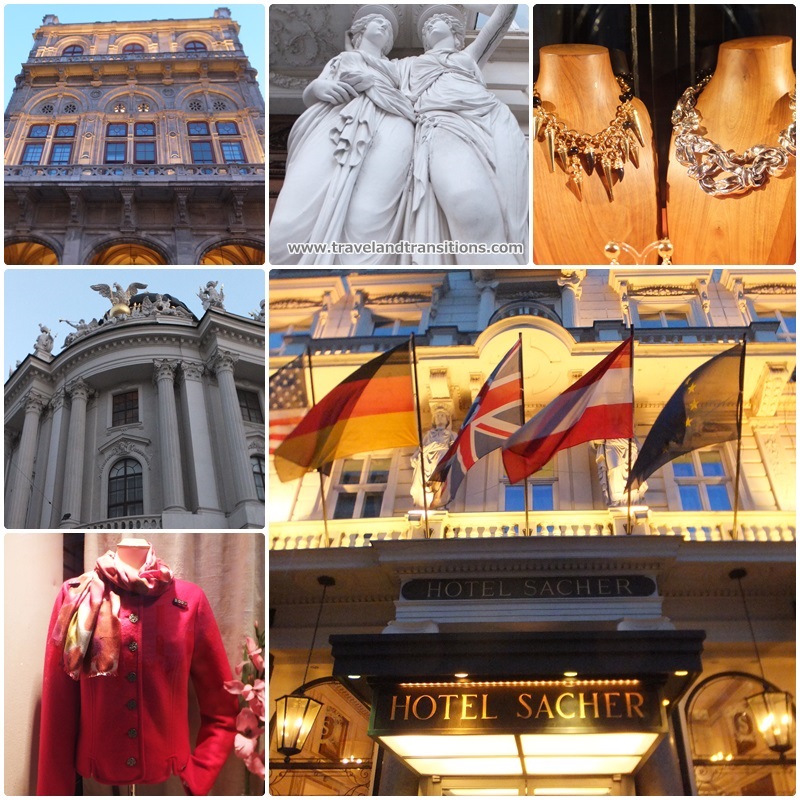 Hotel Sacher is one of Vienna’s landmarks