My time in Krakow was quickly coming to an end, but before my afternoon train to Warsaw I still wanted to get to know some of Krakow’s more recent history. So on the morning of May 9, 2012 I met  my expert local guide Monica in the lobby of my hotel  and we hopped onto a nearby tram. Monica took me to Nowa Huta (literally translated “The New Steel Mill”), a huge district with more than 200,000 inhabitants. Nowa Huta was founded in 1949 as a separate town centered around a huge complex of heavy industry, the Vladimir Lenin Steelworks, which opened in 1954.

Nowa Huta is a perfect example of a master-planned Communist city with countless examples of Socialist Realist architecture and an atmosphere that even today exudes what life was like during the Post-war era in the Peoples Republic of Poland. We experienced the post-Communist atmosphere first hand when we entered the courtyard of the main administrative building and a grumpy-looking security guard admonished us and shoed us away in no uncertain terms. 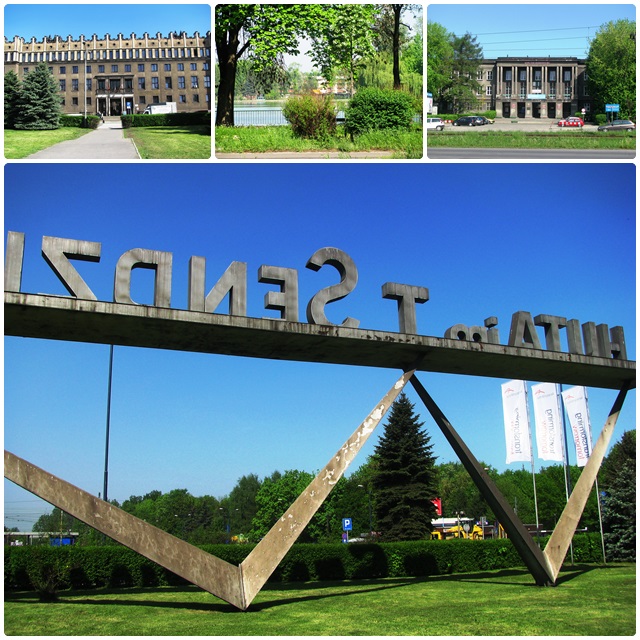 Nowa Huta has a mixture of heavy Socialist Realist Architecture, all built between 1949 and 1956, a style that was enforced by the political doctrine of the day. The heavy dark brown, Renaissance-inspired buildings were succeeded by countless rather unsightly modernist concrete blocks from the late 1950s on. Many of the residential areas in Nowa Huta have a very stark and somewhat depressing feel to them which is livened up a little by some colourful vegetable and fruit markets. 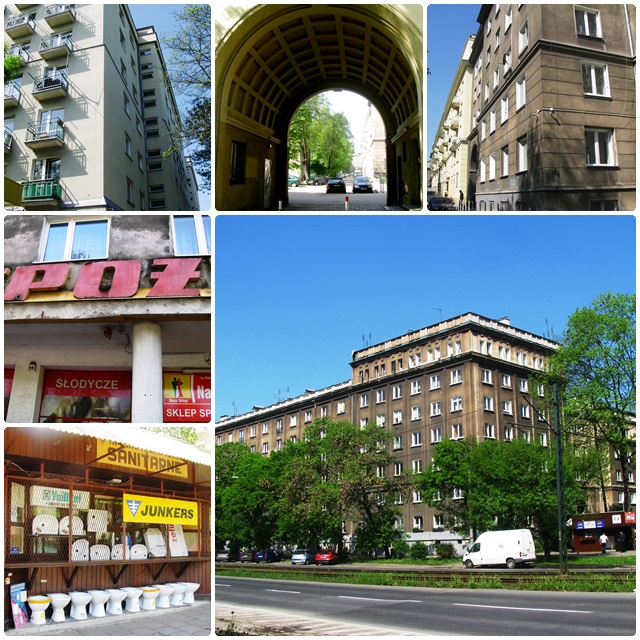 The Socialist-Realist architecture of Nowa Huta

We passed by several churches that local people struggled to build here as the Communist authorities wanted to create a Socialist city without religion. The official dogma of the Communist era suppressed religious expression in a country that has had very strong Roman-Catholic traditions for centuries. A symbol of the faith of the Polish people is the Lord’s Ark, a church that was built between 1967 and 1977 and was assembled piece by piece by volunteers without any help from the government. The cornerstone of this iconic building was laid by Cardinal Karol Wojtyla, the later Pope John Paul II.  The design of the church is indeed reminiscent of Noah’s Ark and one of its most eye-catching features is a 70 metre high mast-shaped crucifix. In the 1980s, this church became a centre of anti-Communist protests and a protester named Bogdan Wlosik was shot to death by the authorities and is remembered with a monument that was erected in 1992. 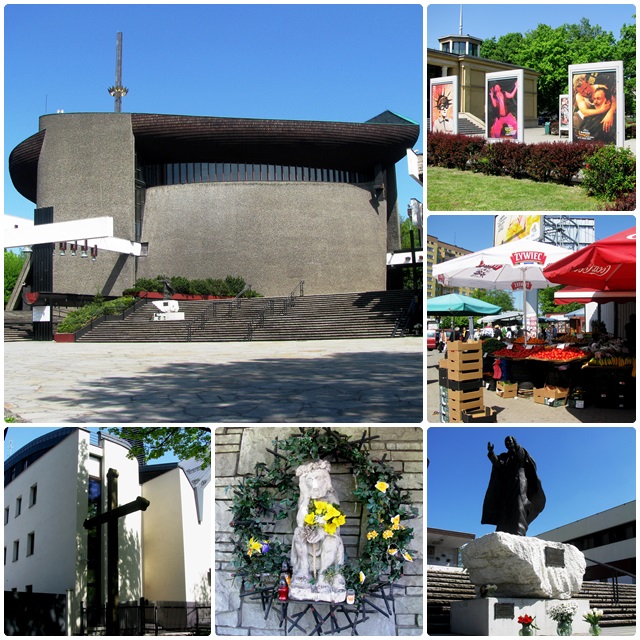 The Lord’s Ark Church – a symbol of Polish Catholicism

After visiting the austere architecture of Nowa Huta, we took the tram back to Krakow’s Old Town and stopped near the Central Railway Station and walked a few minutes to the Juliusz Słowacki Theatre, one of Krakow’s most impressive structures. Designed in the style of some of Europe’s most prominent Baroque theatres, it was completed in 1893 and has hosted performances by some of Poland’s most outstanding actors. It also is the birthplace of the “Young Poland” movement between about 1890 and 1918, an era when musicians were strongly influenced by Neoromanticism. The Slowacki Theatre boasts a façade decorated with allegorical figures and an opulent interior with an impressive marble staircase. 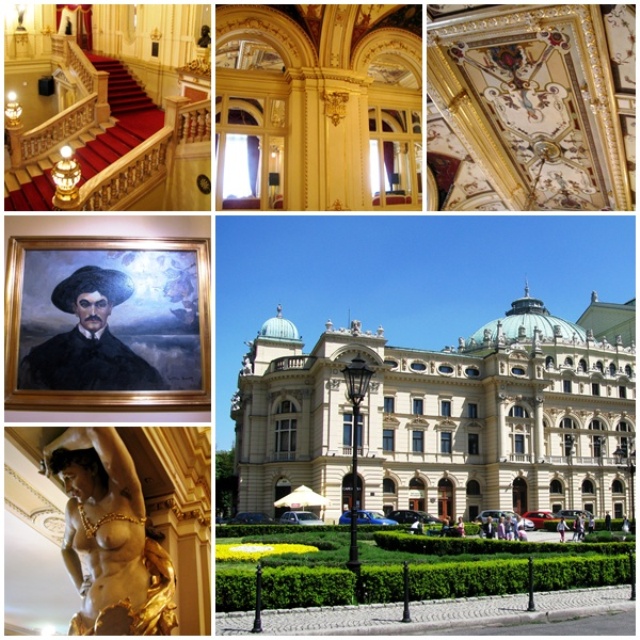 From the Slowacki Theatre I strolled one last time to the Main Square in the Old Town of Krakow, the largest medieval town square in all of Europe. Krakow’s entire Old Town has been designated a UNESCO World Heritage Site. The centerpiece of the Main Square is the Cloth Hall, a former trading centre for merchants that was rebuilt in 1555; today it houses many vendors that sell typical Polish arts and crafts. The Gothic Town Hall Tower was built in the late 1200s and is the only thing left of Krakow’s Old Town Hall which was demolished in 1820 to open up the square. With its historic townhouses and palaces whose main floors are filled with shops, cafes and restaurants, Krakow’s Main Square is a wonderful place to hang out. 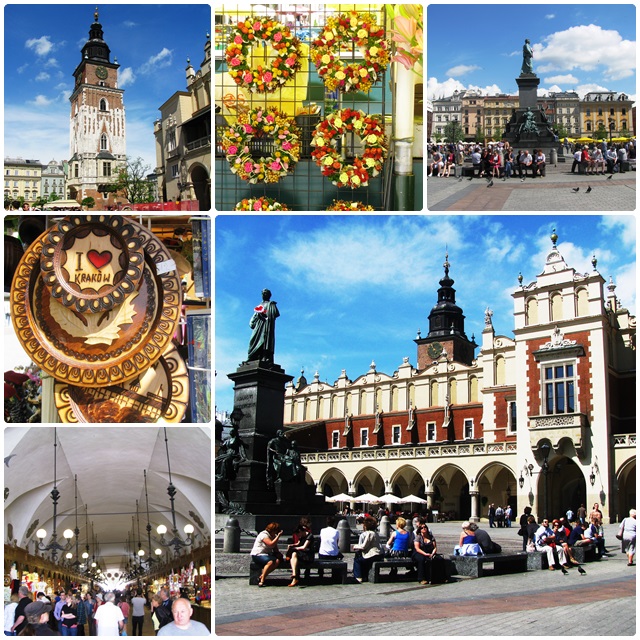 It was time for lunch so I made myself comfortable on one of the outdoor patios of the Main Square and savoured a delicious soup and salad combo while watching the busy action on the square. The last point on my Krakow itinerary was a visit to one of Krakow’s most iconic buildings: St. Mary’s Basilica which overlooks the Main Market Square. Originally started in 1355, this Brick Gothic Building with its asymmetrical towers is one of the most recognized symbols of Krakow. The interior features a magnificent altar piece by Veit Stoss, one of the leading sculptors of the late Gothic era. This masterpiece is the largest Gothic altarpiece in the world and one of Poland’s national treasures. 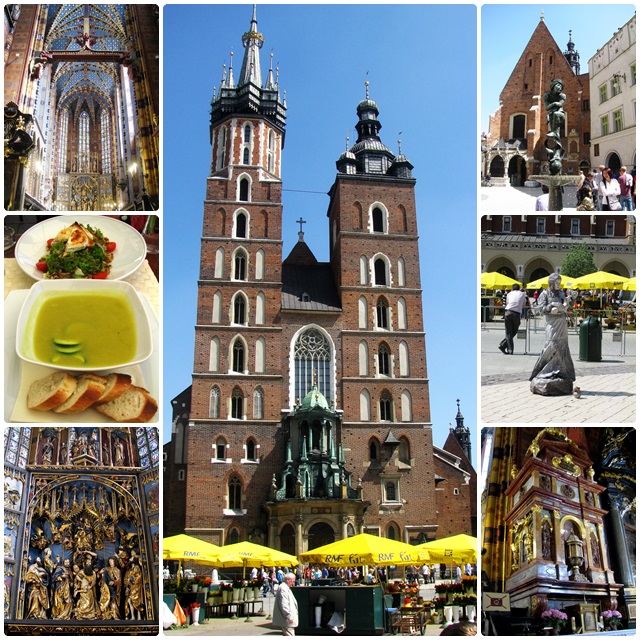 St. Mary’s Basilica is also the location of one of Krakow’s most famous rituals: the “Hejnal mariacki” is a medieval tune played every hour by a trumpeter. During every hourly performance, the music cuts off at the same point in memory of a 13th century trumpeter who was shot in the throat while he was sounding the alarm to warn people of a Mongol attack.  On my way back to the hotel I made a stop at Krakow’s Barbican, part of the old medieval fortification, and enjoyed my last walk through Planty Park, the circular park that stands in place of the old medieval walls that were taken down in the early 1800s. 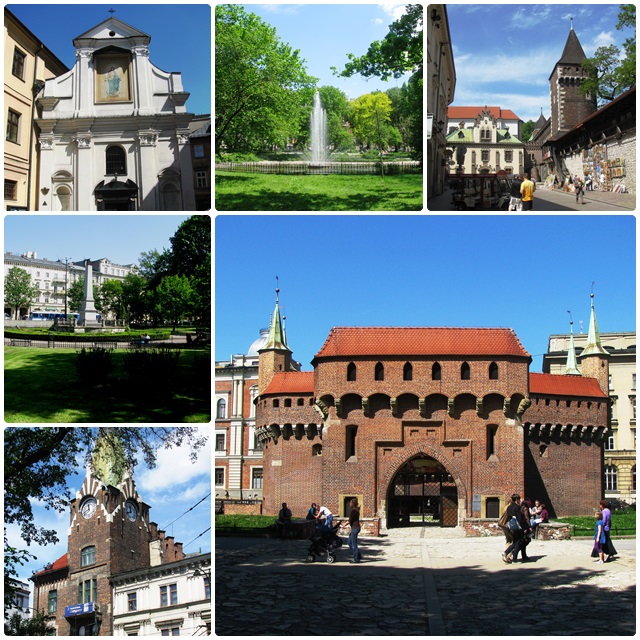 The medieval Barbican and Planty Park

With this my time in Krakow had come to an end and now it was time to get back to the hotel, grab my luggage and get on the train to Warsaw where I was going to spend the next 3 days.