Montmartre – The Most Romantic Spot in Paris

Montmartre – in many people’s opinions  the most romantic area in Paris… This 130 metre high hill is one of the few areas in Paris that have retained their original medieval street layout and were left unscathed by the big rebuilding of Paris in the 1860s under the auspices of Baron de Haussmann. About 60% of medieval Paris disappeared during that time and was replaced by grand boulevards, modern sewers, bridges, and the typical Parisian five or six story apartment buildings.

Not so on Montmartre – the winding cobble-stoned streets and old smaller houses still betray the medieval legacy of Paris. During the 19th century, this area became a popular hangout for artists such as Picasso, Dali, Toulouse-Lautrec and others. It had a lively nightlife full of bordellos and cabarets that still lives on to some degree today. 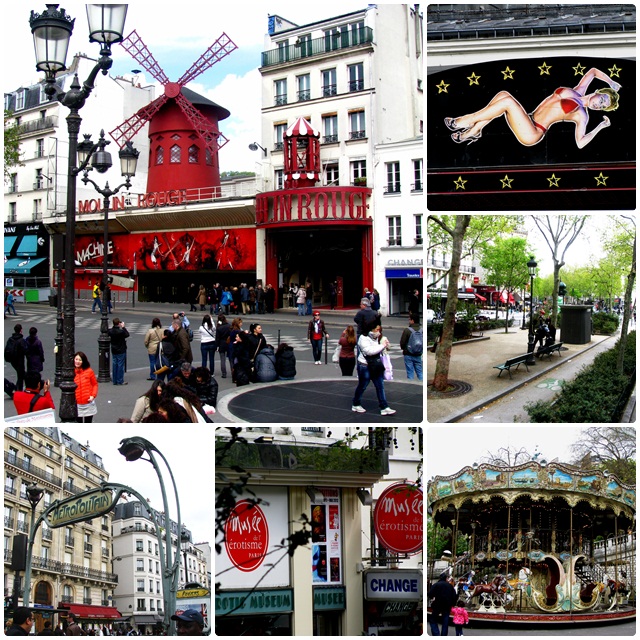 Following my general sightseeing tour of Paris on May 21, 2012, I hopped on the Yellow Line of the L’Open sightseeing bus which takes you up to Montmartre and we passed well-known Paris attractions such as the “Le Printemps” department store and the magnificent Trinity Church, also built in the 1860s during Baron de Haussmann’s beautification and reorganization plan. We started climbing and passing a series of sex shops and cabarets, including the famous Moulin Rouge, whose high-kicking girls made the can-can dance famous the world over.

I hopped off the bus and headed up the Rue de Steinkerque, full of cheap clothing and souvenir shops until I reached the famous carousel at the foot of the hillwhere the big stone steps start leading up to the breathtaking Sacré-Coeur, the Basilica of the Sacred Heart. Even on this drizzly grey day, the sight of this bright white basilica in a Romano-Byzantine style with the 3 big cupolas was awe-inspiring. Once at the top, I stopped and took a good look over Paris which spreads out at the foot of the “Mountain of Martyrs”. 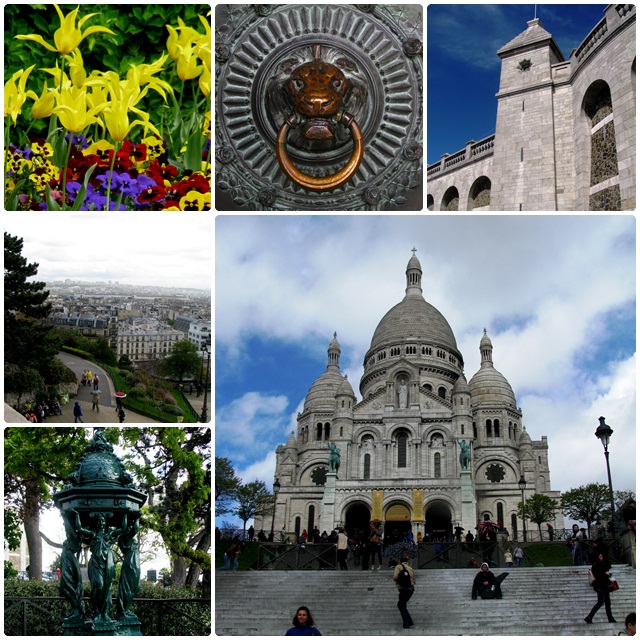 Montmartre and the magnificent Sacré-Coeur

The construction of Sacré-Coeur Basilica began in 1875 and was completed in 1919, so this imposing church is a reasonably recent addition to the Paris skyline. The church was entirely funded from donations and its travertine stone exudes calcite, making sure that the church’s exterior will always remain bright and white, despite any of Paris’s pollution.

Surrounding Sacré-Coeur are a series of small streets that are full of restaurants, cafes, souvenir and gift shops. Painters are on standby to do on-the-spot-portraits and street performers enchant the crowds with a variety of different skills. St-Pierre de Montmartre is a smaller church beside the big basilica that dates back to the 12th century. 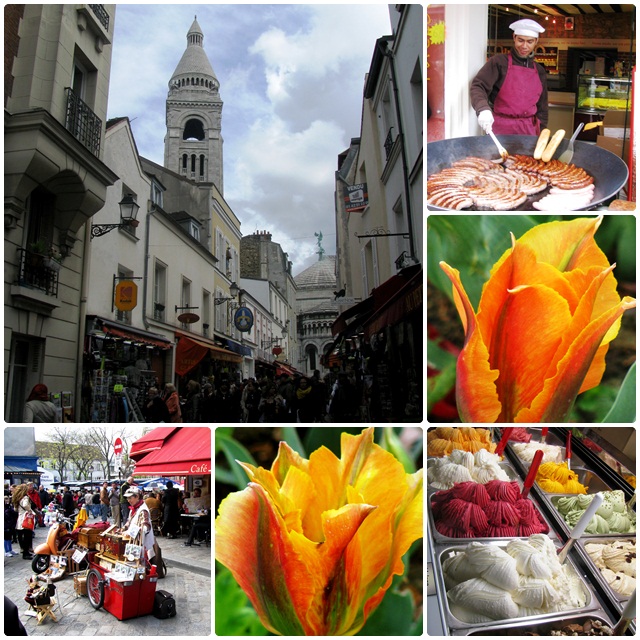 Behind Sacré-Coeur itself is a beautiful garden that was full of blooming spring flowers bursting with colours. Apart from a few locals, hardly any of the tourists were to be found here. Steps away is the Montmartre Vineyard, the last surviving vineyard in Paris. A funicular is available to whisk people up the hill if they want to avoid the stairs and the Espace Dali awaits any visitors who are fascinated by the eccentric works of Surrealist painter Salvador Dali.

After enjoying a delicious ice-cream I started heading downhill again, past the Moulin de la Galette, one of the original 14 windmills on the hill and later a dance hall that was frequented by artists such as Renoir, Pissarro and Van Gogh. Montmartre is without a doubt one of Paris’ most atmospheric areas and a great place to while away an afternoon. My next destination was to check out some of the cemeteries on Montmartre.