Krakow, Poland: A Visit to the Krakow Ghetto

My second day of travel adventures in Krakow, Poland, had started. After a beautiful day the day before, the weather on this day, May 7, 2012, was grey and drizzly. I enjoyed a delicious breakfast at the Hotel Galaxy and was ready for my 9 am meeting with local expert travel guide Monica. We headed off on foot, walking along the shores of the Vistula River, and then crossed a bridge to get to an area of important recent history in Krakow, Poland: the city’s Jewish ghetto.

The Krakow Ghetto was created by the Nazis in March of 1941 and all Jewish inhabitants of the city were forced to relocate into the ghetto. 15,000 people were crowded together in a part of town that originally had only 3,000 residents. The ghetto was hermetically sealed from the surrounding neighbourhoods with a high wall and all windows and doors facing the outside were bricked up. Any streets leading up to the ghetto were strictly guarded by SS officers. In painful irony, the ghetto wall was shaped like gravestones, foreshadowing the ominous future of its residents. Regular street cars led through the ghetto area, but the trams’ windows were sealed and covered with paper so regular Krakow citizens would not be able to see into the Jewish Ghetto. 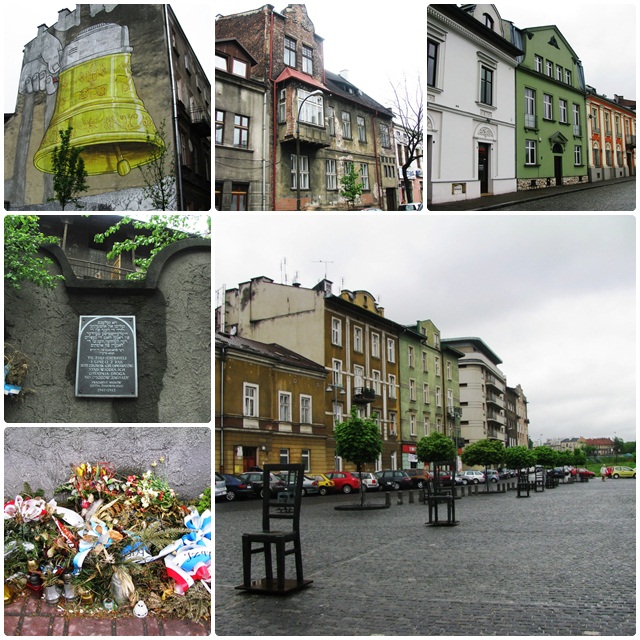 Monica told me about the only non-Jewish retail establishment inside the Ghetto – the “Under the Eagle Pharmacy”. It was owned by Tadeausz Pankiewicz, a Polish citizen who was permitted by the Nazis to run a pharmacy there. He provided much needed and scarce medication to the Jewish residents, often free of charge, and was recognized for his heroism as one of the “Righteous among the Nations by Yad Vashem.

Before World War II, Krakow, Poland, had a very large Jewish population with about 60,000 to 80,000 Jewish residents. Jewish settlement in this city had started in the 13th century and most of the Jewish people were living on the other side of the Vistula River, in the Kazimierz district.

Right after the Nazi invasion in 1939, Jewish people were required to wear the yellow Star of David and persecutions started very quickly.  From May of 1942 onwards, the Nazis implemented large-scale deportations from the Krakow Ghetto, and by March of 1943 it was liquidated. All Jewish residents had either been deported to the Plaszow Labour Camp or directly into the Belzec and Auschwitz extermination camps where almost all of them perished.

After this introduction to the fate of the Krakow’s Jewish citizens during the Nazi occupation, Monica and I went to another fascinating place from the same era: the Oscar Schindler Factory, today an informative museum about World War II history in Krakow, Poland.