In the afternoon of May 6, 2012, my Krakow travel adventures continued. I had already been duly impressed by my visit to Wawel Hill and the Royal Castle as well as Krakow’s historic Main Market Square. After seeing some of the main sights, local bicycle guide Monica took me outside the city centre, past the huge Błonia meadow, location of several masses held by Pope John Paul II which attracted many hundreds of thousands of worshippers. On this day there was some sort of race going on and dozens of runners were speeding along the set course on the big green meadow.

As we started our climb up a hill, we stopped briefly at the Church of St. Salvator, a Roman-Catholic church in the Zwierzyniec district  that was built in the 10th century and redesigned as a Romanesque church in the middle of the 12th century. Then it got even steeper and at some point I had to get off and push my bike. We were making our way up to Kościuszko Mound, one of four historic mounds in Krakow. Tadeusz Kościuszko was a Polish national hero and also played an important role during the American Revolutionary War. In the 1820s the Polish people built this 34 metre high mount to commemorate a national hero.

At the foot of the mound is the neo-Gothic Chapel of  Blessed Bronisława and a brick citadel that was built by the Austrians between 1850 and 1854. A museum is also located here and is devoted to the life of Tadeusz Kościuszko.  The view from the top of the mound over the city is absolutely phenomenal and you can see far into the Polish countryside. 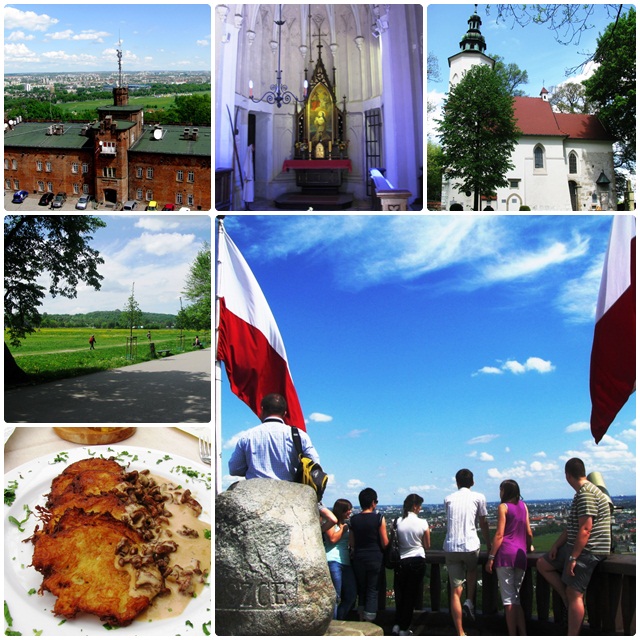 After this interesting yet strenuous Krakow travel adventure, Monica and I cycled back downtown where she dropped me off at the Restaurant Nostalgia which features typical Polish cuisine. On this warm day I made myself comfortable in the outdoor courtyard of the restaurant and enjoyed a Polish vegetable soup followed by potato pancakes with mushroom sauce, a very typical dish here.

In the warm afternoon sun I cycled downtown again, past the Barbican, picked up some brochures at the Krakow’s main tourist office, bought a delicious ice cream and sat down on the Main Market Square to do some people watching. I also got to witness the Hejnał Mariacki, the Warsaw anthem played by a trumpeter from one of St. Mary’s towers every hour and on Polish Radio at noon. The tune ends abruptly in memory of the trumpeter who warned the citizens of Krakow of the advance of the Mongols in the 12th century. According to legend, he ended up getting shot and that’s why the Hejnał is still incomplete. 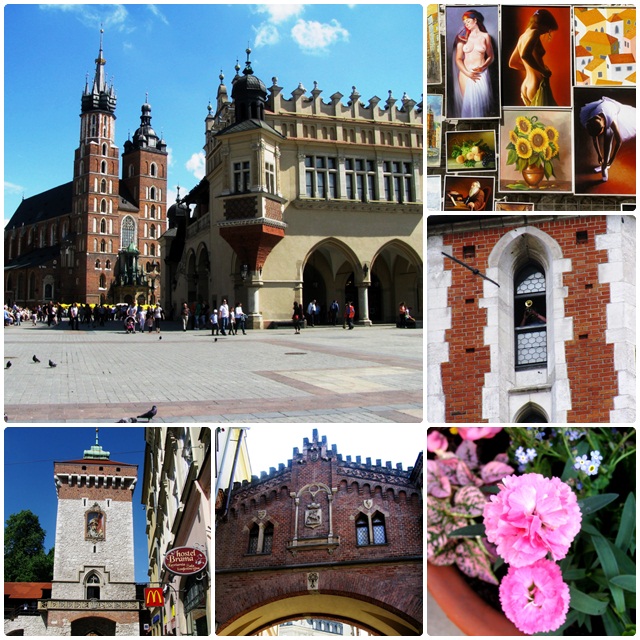 By mid-afternoon I had cycled back to my hotel and took a bit of a rest and before embarking on my Krakow travel explorations in the evening. Although it was drizzling a bit now, I decided to walk downtown through the Jewish Quarter called Kazimierz. I walked past the big Jewish temple on Miodova Street and then strolled past Wawel Hill and the Royal Castle to a restaurant called Pod Baranem, which literally means “At the Ram’s Restaurant”. This family-owned restaurant has been in business since 1977 and specializes in Polish cuisine.

To sample some traditional Polish dishes, I tasted minced meat in cabbage leaves with mushroom sauce as an appetizer, followed by duck with roast potatoes and red beet salad for the main dish, and cheese cake for dessert. Polish cuisine is certainly very hearty and flavourful. 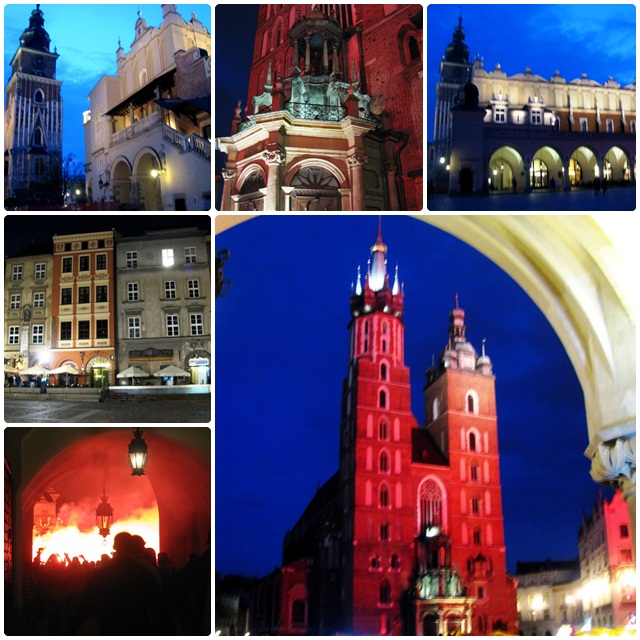 By 8:15 pm I continued my walk downtown and once I arrived on the Main Market Square. Historic St. Mary’s Basilica and the Gothic Cloth Hall were beautifully illuminated and made for an impressive medieval backdrop. I noticed that a large number of people had congregated in front of St. Mary’s Church. I asked some of the police officers that had been stationed around the square and they explained that a rival Polish soccer team had won over Krakow tonight and the out-of-towners were now celebrating on the square.

It got a little scary as a large group of young men was releasing crackers and red flares right in front of the Adam Mickiewicz Monument in the middle of a big crowd. More young people with beers in their hands were arriving in droves, and I had a feeling that a riot might possibly ensue. So I ended up ducking away into Plac Mariacki and Maly Rynek (Little Market Square) which were much quieter now and had a very pleasant and peaceful atmosphere at night. Then I embarked on my 20 minute stroll back to the Hotel Galaxy where I rested up for another day of Krakow travel adventures.