Poland Travel: A Visit to Auschwitz

May 8, 2012 was a tough day: my program in the morning and early afternoon was a visit to Auschwitz, the most notorious and brutal death camp ever implemented by the Nazis. According to presently accepted estimates, about 1.3 million people are believed to have perished here, 90 percent of them Jewish.

After more than a one hour ‘s drive from Krakow through bucolic green landscapes,  I arrived at the Auschwitz main camp, a former Polish army barracks with 28 masonry blocks that was converted into a concentration camp by the Nazis in 1940. At the visitor centre I meet my guide Zbigniew who showed me around the most infamous extermination camp of human history. 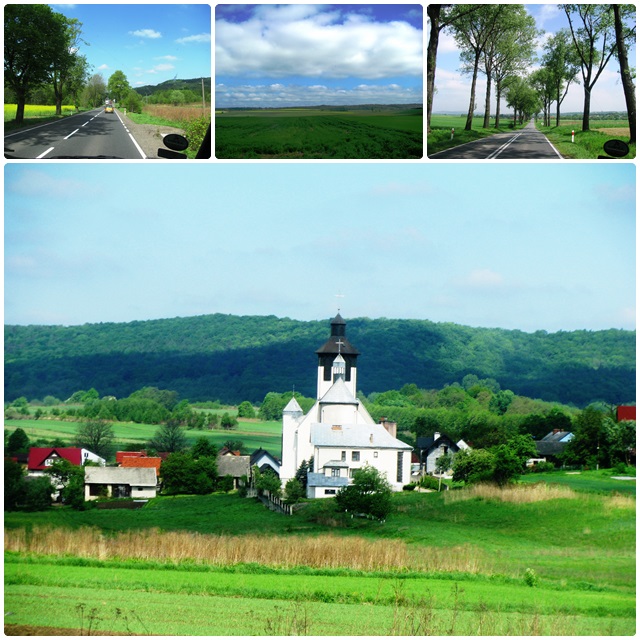 Shortly after starting our walk tour of Auschwitz I, the main camp, we passed underneath the infamous “Arbeit macht frei” (“work makes you free”) sign, a slogan that was used by the Nazis in several concentration camps. Rows of bleak looking brown brick buildings lined both sides of the wide street. In the main camp several barracks provide insight into the prisoner’s daily life. Block 11 was the prison block with 4 standing cells, 1 starvation cell and 1 dark cell. It was called the “prison within the prison” and the location where many prisoners were gruesomely tortured. In the yard outside there is a death wall where thousands of prisoners were shot by firing squad. 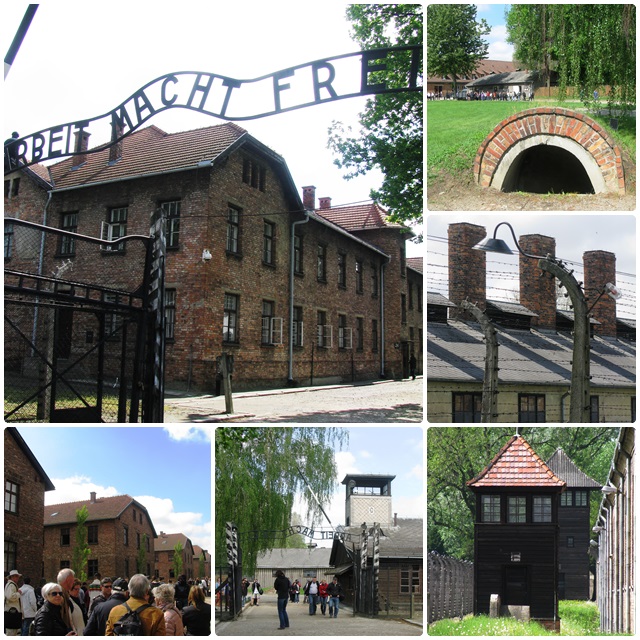 One block provides material evidence of the Holocaust, including countless empty cans of Zyklon B crystals (the toxic gas used in the gas chambers); tons of human hair (that were processed into blankets and soldiers’ uniforms); suitcases, shoes, eyeglasses and prosthetic limbs that had been taken from the deportees.  Zbigniew even took us through an intact gas chamber and crematorium and I was wondering how he deals with working in this environment on a daily basis. He admitted that he has been doing this job for several years now, and he finds his job more difficult every year.  It is virtually impossible to describe the extent of evil that happened here. 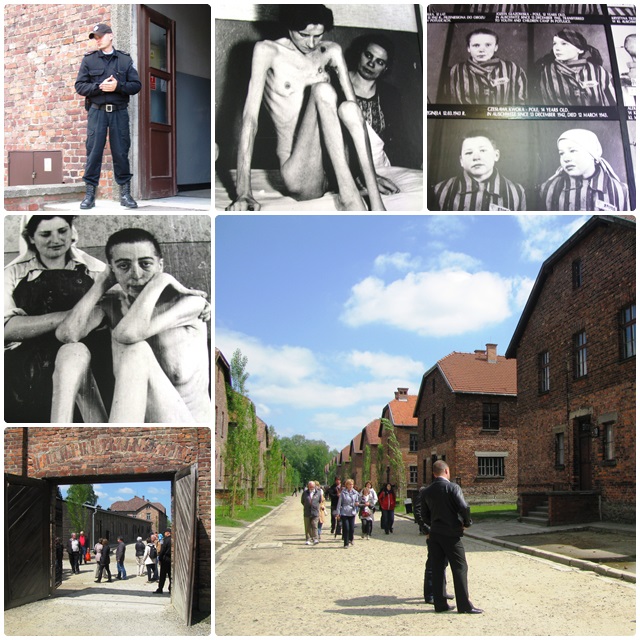 The second part of my visit to Auschwitz was to Auschwitz-Birkenau, the much bigger part of the concentration camp located 3 km from the main camp that started operation in 1941.It consisted of countless one-story wooden barracks that held 3-story wooden bunk beds that were each crammed with up to 12 people. Sanitary facilities were virtually non-existent, and the conditions in the barracks were essentially unsurvivable. Most of the victims that arrived here were actually gassed immediately upon arrival, following the selection process by the SS officers that were stationed at the train tracks at the entrance to the camp. 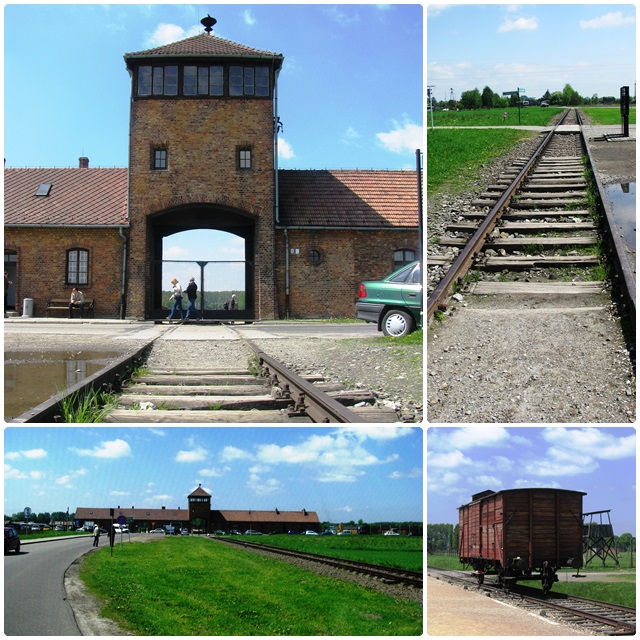 Auschwitz-Birkenau was a true death factory where about 90% of the victims of Auschwitz were murdered. There were 4 huge crematoria that could each process 1500 corpses a day. That was not enough – funeral pyres had to burn the additional bodies that could not be processed by the crematoria. The associated gas chambers could murder 2000 people an hour. The crematoria and gas chambers in Auschwitz Birkenau were blown up by the Nazis at the end of the war to destroy evidence. The extent of this murder on an industrial scale is truly staggering. A visit to Auschwitz can only be described as a gut-wrenching experience. 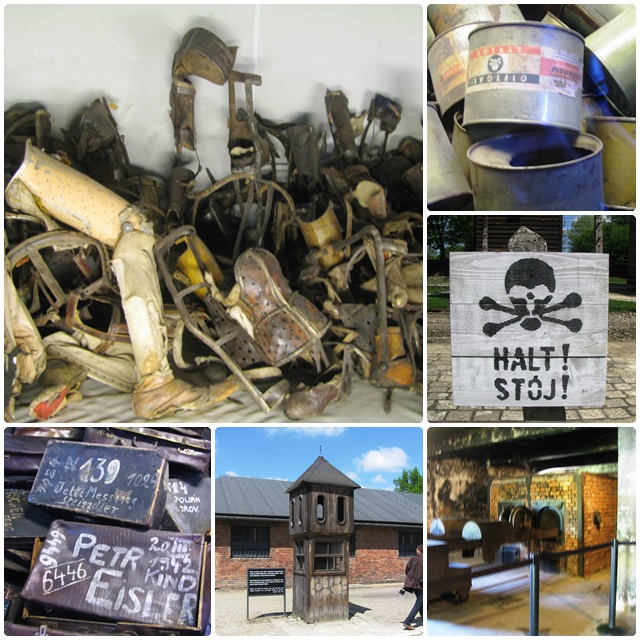 For me, this visit was very personal. Ever since I was a child growing up in Europe I have been trying to understand the atrocities that happened in World War II and how such an era of inhumanity could actually have happened. Throughout the years I have read many books and watched countless grainy black-and-white documentaries about this bleak time in human history. Needless to say, I had always known I would have to visit Auschwitz first-hand. 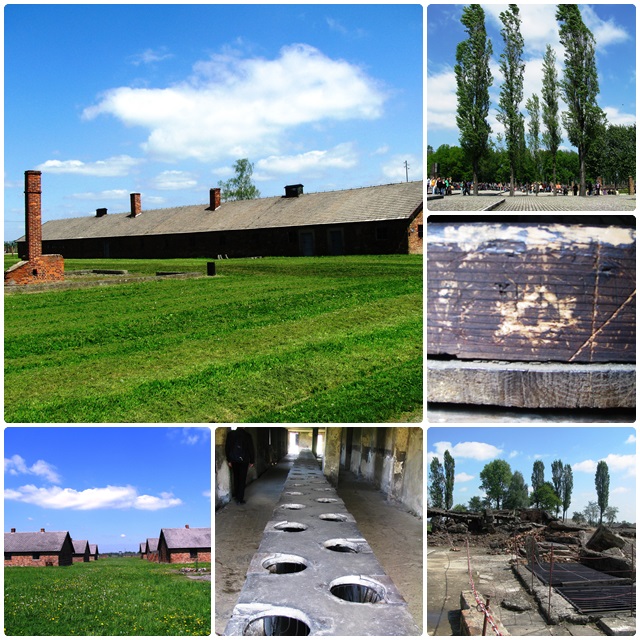 But when I was actually walking through this concentration camp on a beautiful day in May, with the sun shining, the flowers blooming, the birds chirping and the sky a clear bright blue, it was a strangely surreal experience that somehow did not jive with the dark grainy pictures I had always associated with Auschwitz. Entire buses full of teenagers were touring the camp, many of them being a bit rambunctious, as teenagers are known to be. The book store in the main building was bustling with commercial activity, selling mementos and gifts; the cafeteria was feeding hungry travellers, and I had a hard time reconciling these contemporary images with what I knew about history.

Nevertheless, this visit to Auschwitz touched me deeply and confronted me in person with the physical evidence of one worst mass murders in human history. Never again….