Salzkammergut Discoveries: A Visit to the Attersee, Bad Goisern and the Imperial Villa in Bad Ischl

Our Salzkammergut tour on May 6, 2013 took us from St. Wolfgang and St. Gilgen past the Mondsee lake to the Attersee, another picturesque Alpine lake. To the southwest of this lake is the “Höllengebirge” (literally translated the “mountains of hell”) which rise up to a height of 1800 metres (more than 5900 feet) while to the southwest there is the Schafberg (“Sheep Mountain”) which is accessible through a rack railway that has been in existence since 1893. 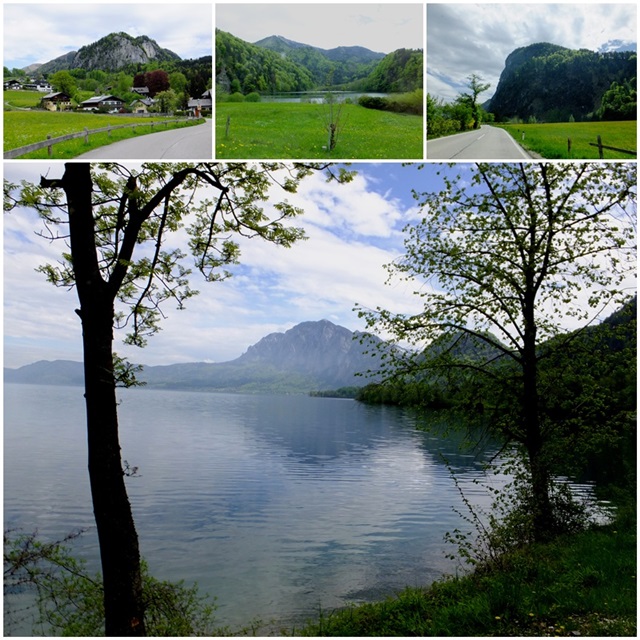 Coming from the Attersee and driving back to Bad Ischl, we stopped in the river valley of Weissenbach. The curvy roads in this valley are particularly popular with motorcyclists, and many warning signs caution people not to drive too fast because this scenic road has experienced many motorcycle accidents over the years. We ventured forth into the Weissenbach River whose water was still ice cold – runoff from the high Alpine mountains surrounding it. 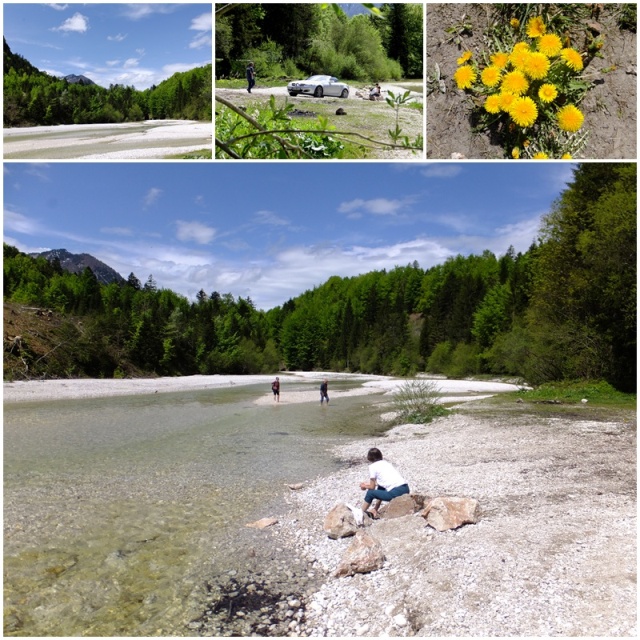 Our amazing Salzkammergut driving tour continued from Bad Ischl to Bad Goisern. We arrived in this little village on Lake Hallstatt at around 1 pm, just in time for lunch. Bad Goisern is another spa town and tourists have been travelling to this picturesque little town since the early 1800s. 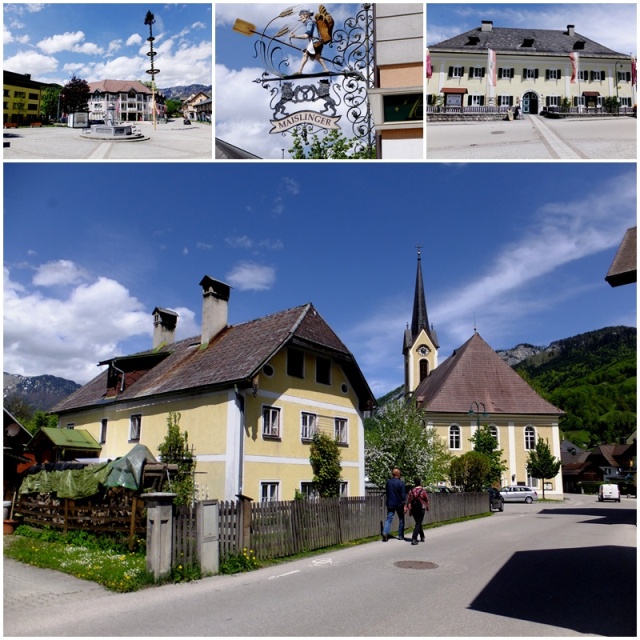 Ready for lunch in Bad Goisern

We were definitely ready for lunch so we and we sat down on the patio of a local restaurant, across from the parish church. Bad Goisern is particularly renowned for a particular hiking shoe that has been made here for many decades. Many celebrities, including Arnold Schwarzenegger, have been seen wearing hiking shoes from Bad Goisern. 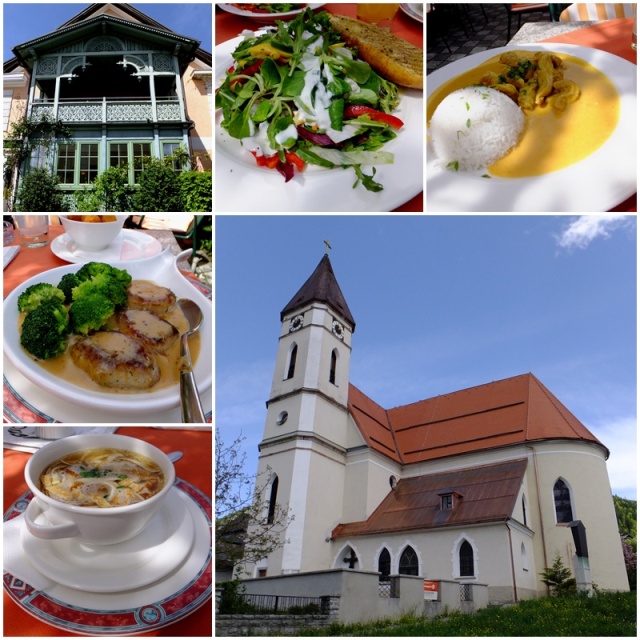 In the afternoon we drove back to Bad Ischl. I made a visit to the famous “Kaiservilla”, the summer residence of Habsburg Emperor Franz Joseph and his popular wife Elisabeth (Sissi) who lived here in the second half of the 19th century. The emperor loved to go hunting here and shot more than 2000 chamois, many of which are mounted inside the castle. In a guided tour I also saw the room where Emperor Franz Joseph signed the declaration of war against Serbia in 1914, thereby triggering the First World War. 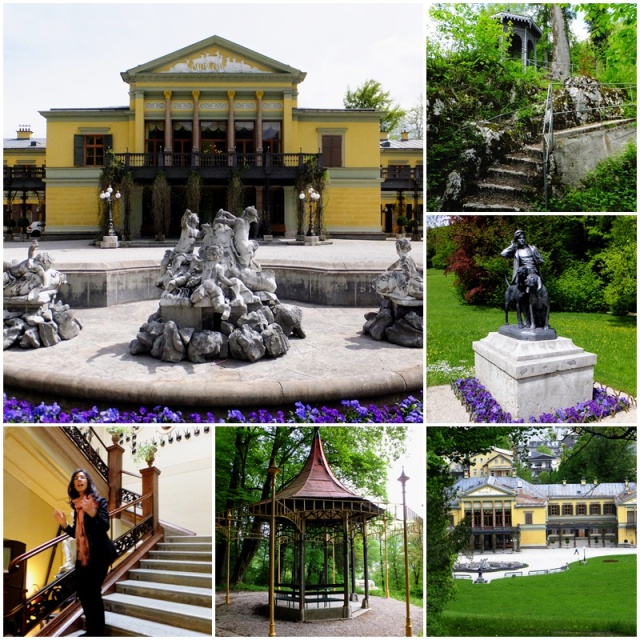 Part of the expansive grounds of the Kaiservilla in Bad Ischl is the “Marmorschlössl”, a marble villa northwest of the main imperial mansion. This was the refuge of Empress Sissi and it has been the home of an interesting photo museum since 1978. Empress Sissi would retreat here to write poems, to plan her many travels and to receive friends. She was never comfortable at the Habsburg imperial court. 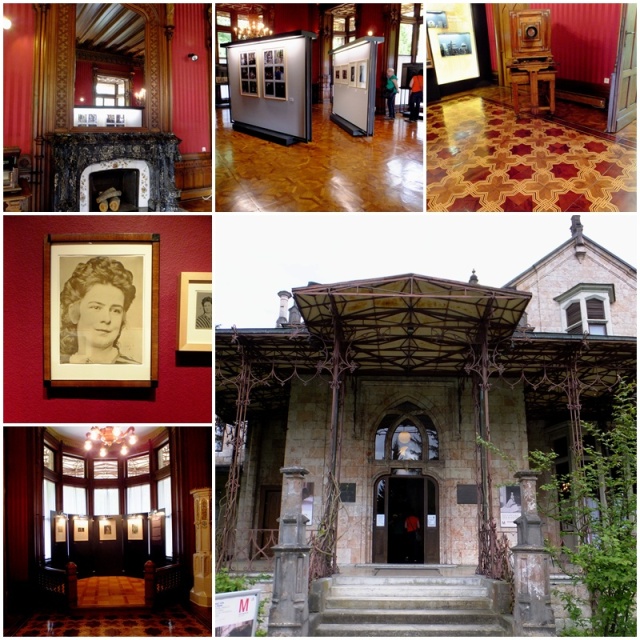 In the late afternoon of May 6, 2013 we took our last walk in Bad Ischl, downtown and next to the Traun River. This spa town has been a popular getaway destination since the early 19th century and became particularly popular towards the turn of the 20th century when the Austrian aristocracy and many other celebrities, writers and musicians vacationed here. 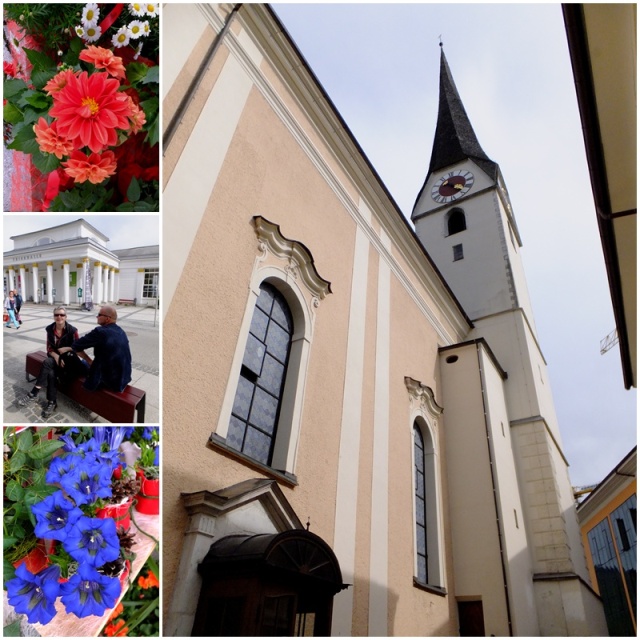 Our last evening in Bad Ischl

To celebrate our last evening in Bad Ischl, we had a coffee at the famous Zauner pastry shop next to the fast-flowing Traun River. “Konditorei Zauner” has been in business since 1832 and was a preferred supplier to the imperial Habsburg court. Then we retreated to our holiday apartment and enjoyed a great outdoor picnic at dinner time. When I was talking with owner Ken Faulkner, even the deer came out to graze on the meadows. 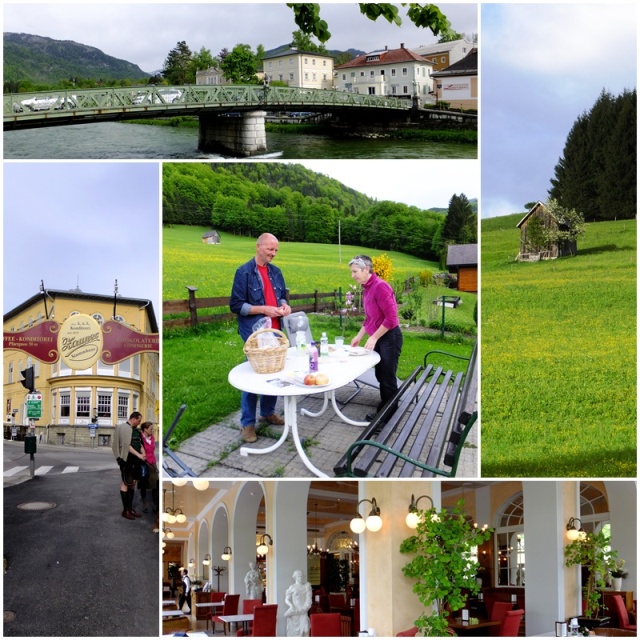 A picnic in the backyard of our rental apartment

Our second day in the Salzkammergut had come to an end and tomorrow we would be driving back to Styria, my native province in Austria, but we had planned to make some stops in famous Hallstatt as well as in the resort town of Bad Aussee.