Viennese Discoveries at the Karlskirche, the Vienna Secession Building, the Vienna State Opera and the Ringstrasse

Another gorgeous day was in store for us on May 20, 2014. While my brother and sister-in-law went hiking in the Vienna Woods I set off to explore the capital city of my native country. I started on the Karlsplatz (Charles Square) with its magnificent Karlskirche (Church of St. Charles), Vienna’s most impressive baroque church. I also admired the Art Nouveau pavilions by renowned Art Nouveau architect Otto Wagner that he built for the Vienna Stadtbahn, the Vienna Metropolitan Railway that was constructed between 1894 and 1901. Just a few minutes away I made a stop at another famous Viennese Art Nouveau attraction: the Vienna Secession Building, an exhibition hall designed in 1897 by renowned Viennese architect Joseph Maria Olbrich that features the Beethoven Frieze by Gustav Klimt, one of the most important pieces of artwork of the Viennese Secession (Art Nouveau) style of the turn of the last century. Vienna is known as one of the most important centres of Art Nouveau culture and experienced an incredible period of creativity in architecture, art and literature in the late 1800s and early 1900s. 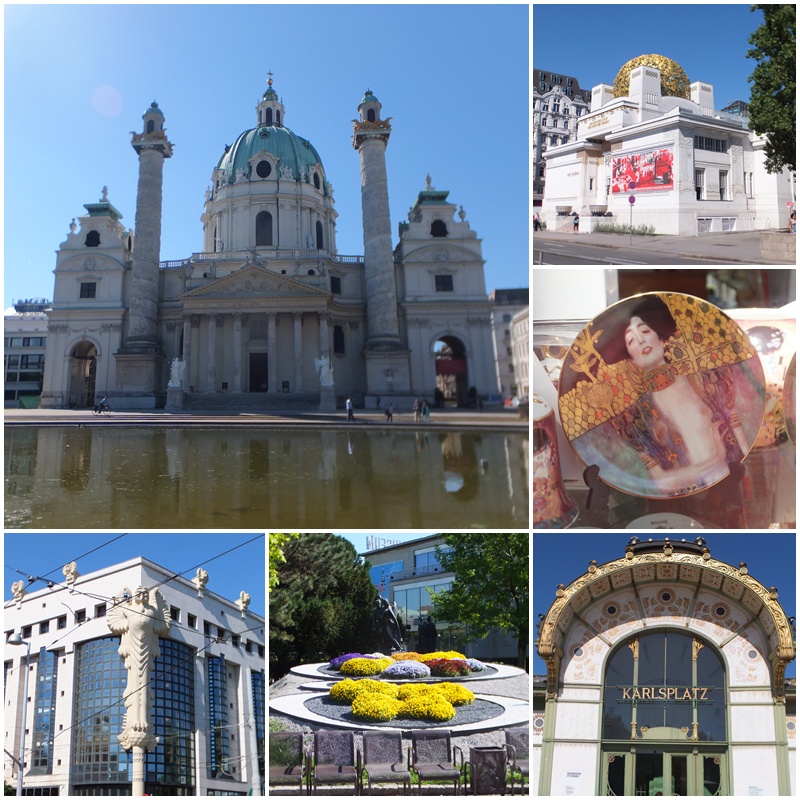 Vienna’s Karlsplatz, the Karlskirche and the Art Nouveau Secession Building

After taking in some of Vienna’s outstanding Art Nouveau landmarks I walked to the Ringstrasse (the Ring Road), Vienna’s splendid boulevard that surrounds the historic centre of town. Constructed between the 1860s and 1890s after the medieval fortifications of Vienna were taken down, this road is one of the most opulent boulevards in the world. I started my walk at the Wiener Staatsoper (Vienna State Opera), a magnificent Neo-Renaissance structure that was built between 1861 and 1869. As the home of the Vienna Philharmonic Orchestra, this is still one of the most important opera houses in the world. I continued my stroll to the Museum of Art History which is facing its mirror image, the Museum of Natural History, two of Vienna’s flagship museums.

The Maria-Theresien-Platz (Maria Theresa Square) is located in between these two museums and features a large sculpture of Austrian Empress Maria Theresa, the only female ruler of the Habsburg Empire who ruled for 40 years during the 1700s and introduced many enlightened social and educational reforms. The next important building on the Ringstrasse is the Austrian Parliament Building, a Greek Revival masterpiece that was constructed between 1874 and 1883, one of the largest buildings on this boulevard with over 13,500 square meters or more than 145,000 square feet. A sweeping curved access ramp leads up to the central structure that is reminiscent of a Greek temple with its impressive Corinthian pillars. The gable of this striking structure has been unchanged since its construction and still features symbols and allegories that represent the 17 provinces of the former Austro-Hungarian Empire. Both ends of the roof are decorated with a total of eight bronze quadrigas, a chariot drawn by four horses. 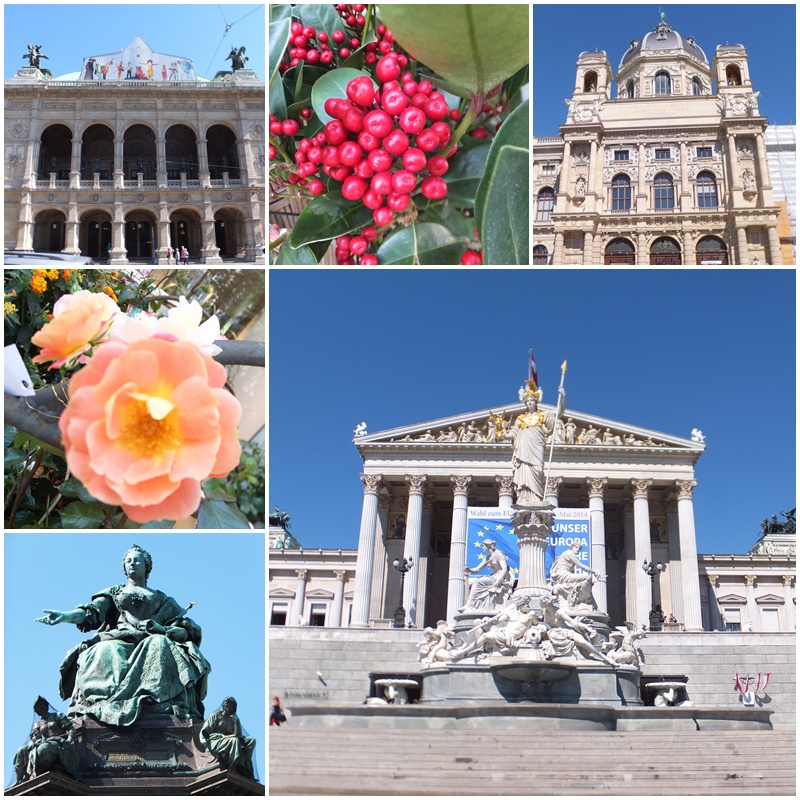 Landmarks on the Ringstrasse: the Vienna State Opera, the Museum of Art History & the Austrian Parliament

I strolled further along the Ringstrasse where I got to admire another iconic landmark: Vienna City Hall, location of Vienna’s mayor and city council. Designed in a neo-Gothic style and built between 1782 and 1883, this magnificent building has a central tower that is crowned by a statue called the “Rathausmann” (city hall man). A lovely park is located right in front of City Hall, and right across the street is another Vienna icon: the Burgtheater, the Austrian National Theatre and one of the most significant German-language theatres in the world. Designed by Gottfried Semper and Karl von Hasenauer, the current Burgtheater building was opened in 1888 although an earlier version had existed since 1741 during the reign of Habsburg Empress Maria Theresa. Paintings by Gustav Klimt, Franz Matsch and Ernst Klimt adorn the ceiling above the staircase. As a result of bombing during WWII, this theatre burned to the ground and was reconstructed and reopened in 1955. In terms of the number of employees and its budget, the Burgtheater is the “richest and largest repertoire theatre in the world.” 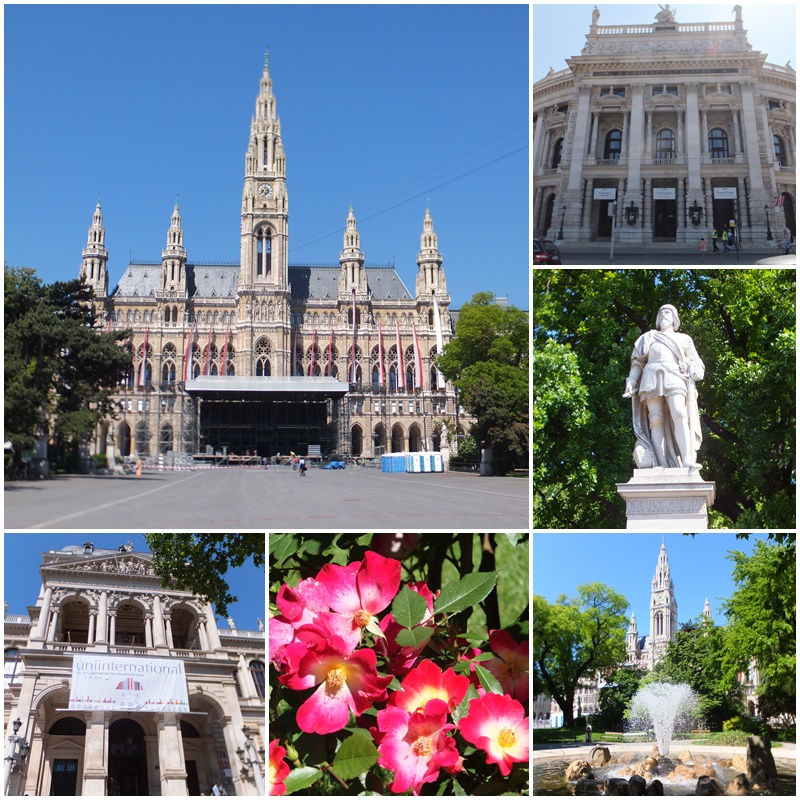 More Ringstrasse icons: Vienna City Hall, the University of Vienna and the Burgtheater

My next stop along my discoveries of Vienna’s Ringstrasse was the Votivkirche, one of the most important neo-Gothic sacral buildings in the world.